Short URL for this page: https://www.mooresoftwareservices.com/ky4 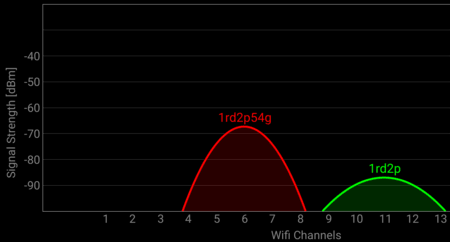 Many businesses have TVs in waiting rooms and break rooms. In some cases the TVs receive their programming over WiFi connections, which can sometimes be unreliable. I was recently asked to diagnose some WiFi problems with an LG 42L-V5500 TV set and discovered some configuration problems that don’t occur in most Internet devices.

There were two symptoms:

The buffering problem turned out to be interference on the 802.11n 2.4Ghz channel number 6. The router was set for automatic channel selection; using the WiFi Analyzer Android application, it was clear that channel number 6 had little interference in the vicinity of the router, but much interference in the vicinity of the TV. Switching the router to channel 1 improved the signal strength registered on the TV from two to three bars. The 5Ghz channel showed four bars but the Wi-Fi Protected Setup (WPS) automatic configuration would not choose the 5G channel.

To configure the 5Ghz channel, I had to manually configure select the 5Ghz SSID, but configuration failed when the TV tried to access a domain name server (DNS). Most devices list two DNS servers during DHCP configuration, but the TV was only listing one, and it could not get a response from the DNS server.

To resolve this problem, I switched the TV to static IP configuration, and instead of using the Internet service provider (ISP) provided DNS servers, I configured the Google DNS server address of 8.8.8.8. The Smart TV went through its tests quickly and all applications initialized quickly and worked reliably.

First, it is clear that when configuring home and small business WiFi networks you must look at interference at both the router location and at the receiver location; sometimes this will require manual configuration to use 5Ghz channels where there are fewer interference problems than on 2.4Ghz channels. Second, when devices have difficulty initializing, look at DNS problems early in the diagnosis process.

This web site uses cookies to provide user authentication and improve your user experience through the use of Google Analytics and Matomo Analytics. It also uses contact information for email and phone communcation. For details, see the Privacy Policy.