Short URL for this page: https://www.mooresoftwareservices.com/ap

The CPI-UCT has stabilized since mid-2011 as shown in Figure 1. This will change the severity of loss behavior of most auto loan portfolios, causing losses to be higher than expected for institutions that price loans using an estimate for the severity of loss using a rolling average with a period of more than two years.

Figure 1 shows the dramatic drop in the CPI-UCT during the early part of the recession in 2008-2009, followed by a dramatic rebound due to the reduced new-car manufacturing capacity that resulted from bankruptcies and restructuring in the auto industry. The rebound largely ended in the summer of 2011. The CPI-UCT is currently dominated by seasonal used-auto purchase demand; it is high in the Spring and low in the Winter. 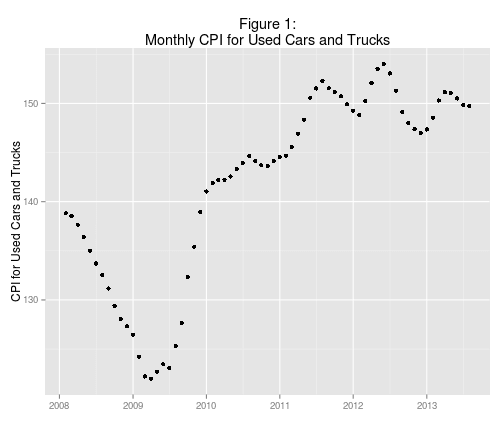 Figure 2 shows the 5-year rolling average for CPI-UCT and has a clearly rising value that will cause losses to be lower then originally estimated. For example, loans that originated in January of 2012 (rolling average of 138 used for pricing) and defaulted in January of 2013 (actual value of 147 at time of default) saw a 6% higher recovery than expected. The better than expected performance will decline as the 2008-2009 crash numbers continue to drop out of a 5-year rolling average in the coming months.

This affect would be greatest for loans originated in October, November or December of 2009 when the 5-year rolling average hit a minimum of slightly more than 135. Loans originated at the bottom would experience an approximately 8.5% better than expected recovery in the event of default. 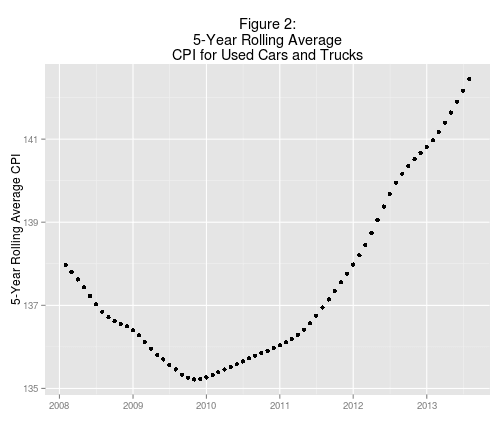 Institutions that use shorter rolling averages have already begun to see the 2008-2009 crash values and the subsequent rebound begin to drop out. For example, using a 3-year rolling average for pricing purpose as shown in Figure 3, the same January 2012 loan would have been priced with a estimated recovery value of 140, with an actual recovery value of 147 at time of default for a 5% higher than expected recovery.

The three-year rolling average is more volatile than the 5-year; the minimum would have been 132, for an approximately 11.4% better than expected recovery in January, 2013. This benefit will rapidly go away as the values from the crash continue to drop out of the rolling average used for pricing. 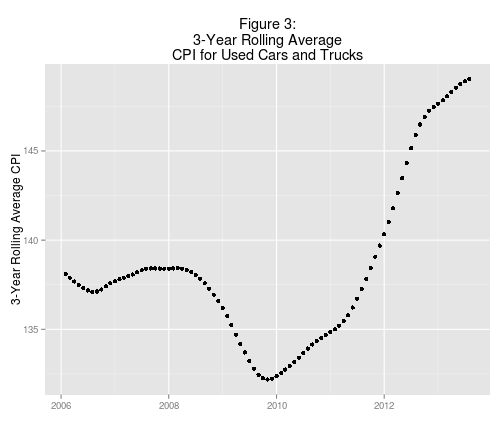 Using the 2-year rolling average shown in Figure 4, the recovery estimate used for pricing would be about 146, for a less than 1% better than expected recovery in January of 2013; institutions using this shorter rolling average have already seen the affects of the crash period dropping out of the average. 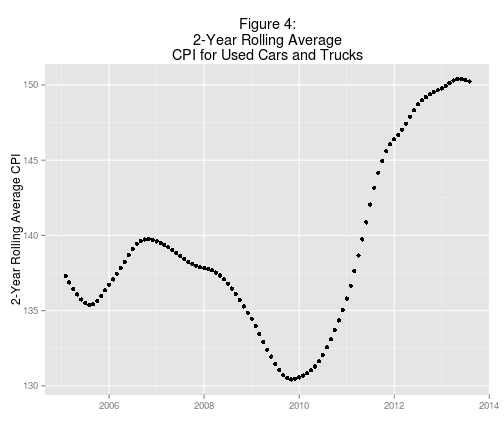 The CPI-UCT is helpful in determining whether changes in recoveries are due to credit problems, or used car market problems. The crash in used car and truck prices that occurred in 2008-2009 was a very unusual event, and will cause some unusual and perhaps negative changes in the severity of loss in car loan portfolios.

Data are from the CUSR0000SETA02 series available from the St. Louis Federal Reserve FRED2 system.

This web site uses cookies to provide user authentication and improve your user experience through the use of Google Analytics and Matomo Analytics. It also uses contact information for email and phone communcation. For details, see the Privacy Policy.